Honoring our ancestors and celebrating indigenous heroes throughout history through storytelling, pop culture, media, and publishing. 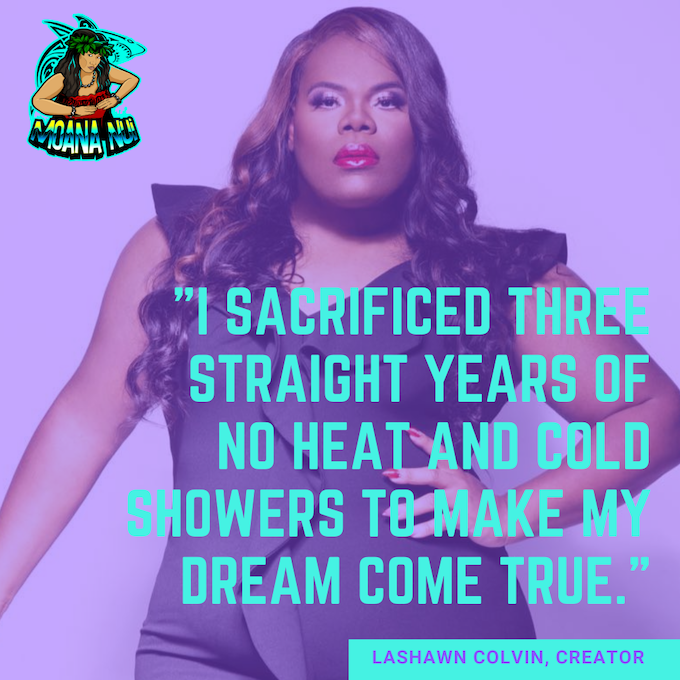 Lashawn Colvin is the editor and creator of Beautiful Soldiers, her comic career started in early 2014. As a graphics illustrator, editor, writer and now comic book store owner. The first black woman to own a comic book store in the south!

Lashawn Colvin began her art journey at a very young age, however, there was another gift she found herself having. Writing. Her passion for writing and creating stories goes very deep, as a child she drew inspiration for creating stories from one of her favorite child hood tv shows. 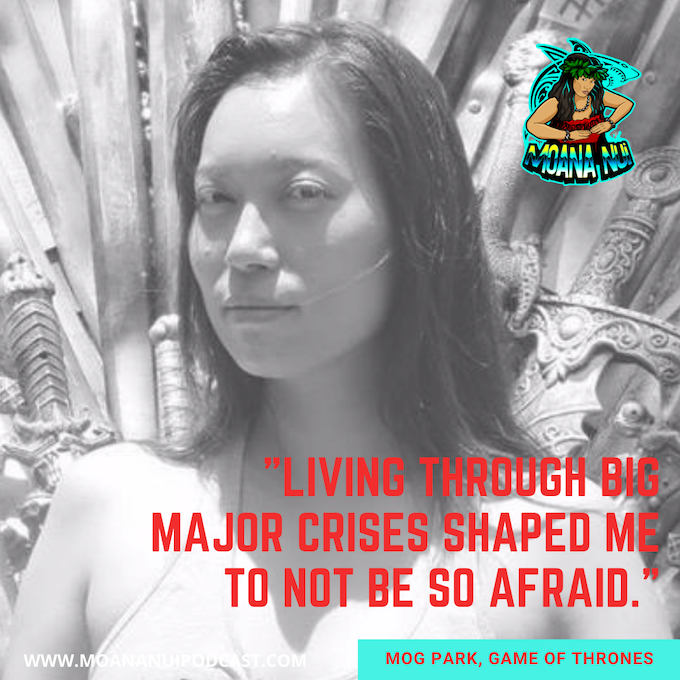 Mog is a world traveler having lived in Australia, Egypt, Africa, Russian when USSR broke down, Japan when the Kobe earthquake hit. She has moved around the US too living in California, Wisconsin, Illinois and then calling Hawaii home. She currently resides in the Los Angeles area. During her traveling she has learned to speak and write in 3 languages.; Korean, Japanese and English.

Mog Park is a traditional artist, from Academy of Art University in San Francisco. After graduating, she began working for Tokyo Pop where, she gained knowledgeable experience leading to becoming a concept design/illustrator on HBO’s Game of Thrones.

She enjoys going on the con run meeting new people sharing art, food and life experiences. She hopes the shows will return soon this year.

Coming off fresh from working in the gaming industry she now focuses on providing covers and other art to indie publishers.

Episode 27: Creating Your Own Path: Cosplay to HBCU Con with CC The Greek Geek 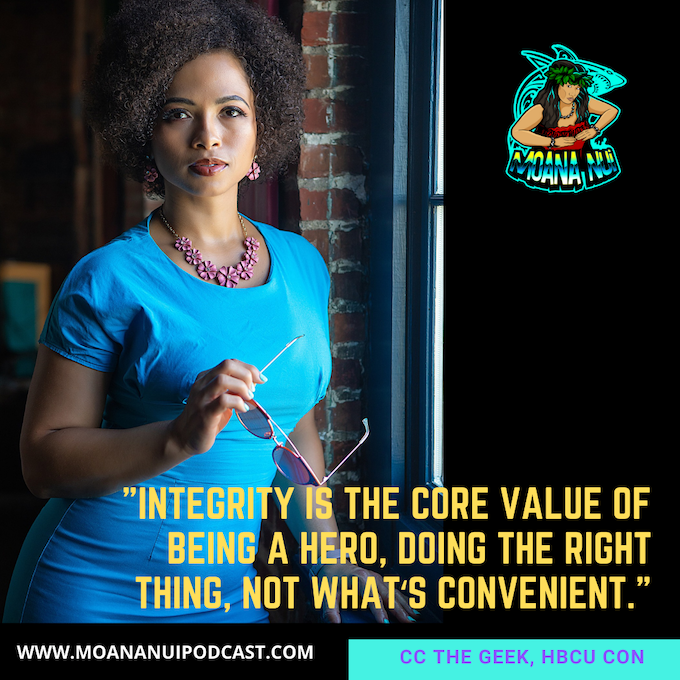 CC the Geek is an entrepreneur, philanthropist, and cosplayer from Washington, DC. Her activist work extends as far back as 2007 as a volunteer in Hurricane Katrina relief efforts.  She subsequently founded the Alternative Spring Break (@BSUASB) program at her alma mater, Bowie State University. CC takes pride in using her platform to create safe spaces for Black and other marginalized cosplayers.

She is the founder and CEO of HBCU Con, celebrating the influence and intersections of historically Black institutions and the geek community. She’s also a cohost, co-writer, and marketing strategist for Everybody Gets One podcast (@EverybodyGets01), and consultant for hire. CC has been cosplaying since 2015, and is a proud member of Delta Sigma Theta Sorority, Incorporated."

Connect with CC and HBCU Con:

Catch CC in the pages of the Wildcard Chronicles comic book series: http://www.burningspearcomix.com

Episode 26: Capture Moments for Others with Dana Morgan

Dana Morgan is an Executive Assistant/Event Planner by day, and a con/cosplay and event photographer by night. Her passion for photography is unchartered and she uses that passion to drive the art of cosplay pass the limits; providing her subjects with eye catching photos that embody their characters and compliments their creativity.

Dana has taken pictures for corporate events, orchestras, weddings and more for over 18 years. In 2016, she started working as a con staff photographer for local cons. You can find her capturing moments at various cons such as MomoCon, Anime Weekend Atlanta, DragonCon and much more! Dana created her company, Danique Events, providing personalized photos to the cosplay and con communities with her special branded touch.

Dana's natural eye for photography, love of anime, comics, games, and movies puts her at ease in the con world. Because of her impressive dossier and magnetic personality, Dana was sought after to team up with Cosplay Your Way, to help develop and enhance the photos of POC cosplayers in Atlanta through Cosplay Noir and 28 Days of Black Cosplay. Her photos have been with DC Comics and many more! In 2019, her friends and con family gave her a new goal... to become a cosplayer! She recently added another two items on her repertoire in 2021: the co-host of the Moana Nui Podcast and voice actor.

Follow this upcoming and highly sought after photographer at Danique Events: www.facebook.com/DaniqueEvents 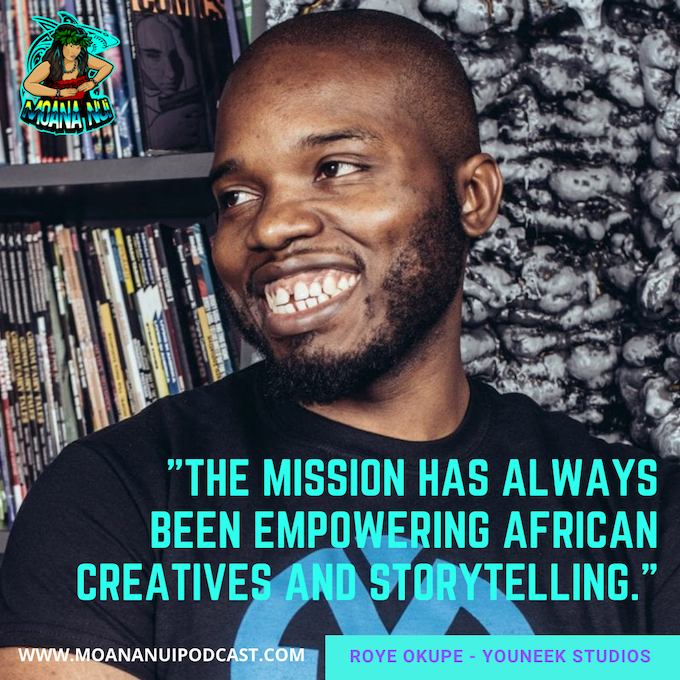 Born in Lagos, Nigeria, Roye Okupe is an award-winning filmmaker, author, speaker, and entrepreneur whose passion for comics and animation led him to found YouNeek Studios in 2012, an avenue that would allow him to pursue his dream of creating a diverse library of superheroes. Under that umbrella, Roye wrote, produced, and directed several animated productions including, but not limited to, the award-winning and critically acclaimed Malika - Warrior Queen Animated Short. These productions have allowed Roye to attain many prestigious recognitions, such as being #5 on Ventures Africa's list of 40 African innovators to watch (2016) as well as being part of NewAfrican Magazines' 100 most influential Africans two years in a row (2016 & 2017).

With the superhero genre at the height of its popularity, Roye has made it a goal to create a connected universe of superhero and fantasy stories inspired by African history, culture and mythology. In August 2015, Roye released his debut graphic novel titled: E.X.O. The Legend of Wale Williams Part One, a superhero story set in a futuristic Nigeria. E.X.O. was received with critical acclaim and has since been featured on CNN, Forbes, The New York Times, N.B.C., The Guardian, ABC7, B.B.C., The Huffington Post, Mashable and more! Roye's sophomore graphic novel: Malika - Warrior Queen was also received with critical acclaim, selling more than 40,000 copies of its chapter one special during Diamond Comic's Free Comic Book Day (2017). Both books have gone on to win several awards, including multiple Glyph Comic Awards and Comic Fist Awards.

Episode 24: Find Your Reason to Smile with Creator/Artist Javier Winnik 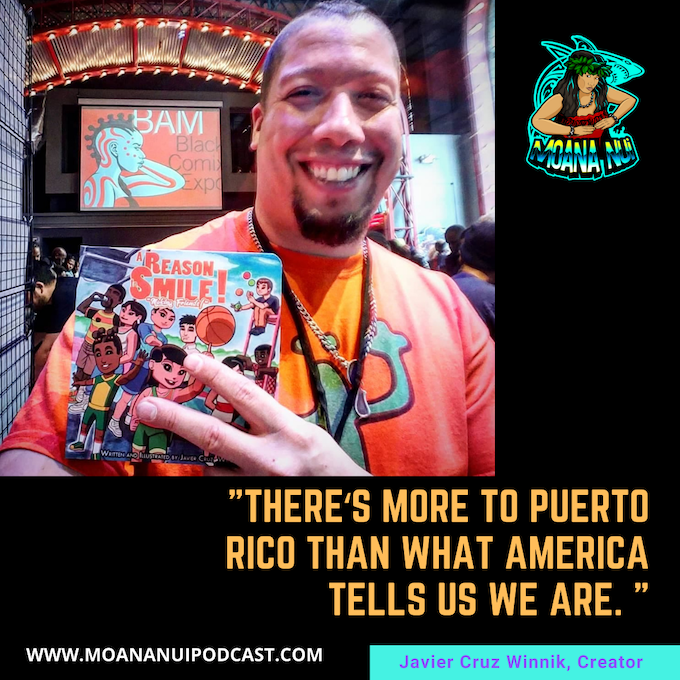 Javier Cruz Winnik began his career selling his drawings at comic cons and landed an opportunity to do sketchcards for UpperDeck! Seeing no stories about Puerto Ricans in the school he worked at, he self-published a book, titled "A Reason to Smile!" which stars a little Puerto Rican girl from NYC, showing the positive side of Puerto Ricans in Pop Culture. He's since created 3 books with 2 on the way, all funded on Kickstarter, and has gone on to sell over 3,000 copies! He has since created stories for Puerto Rico Strong (LionForge) and Ricanstruction (Somos Arte/DC). 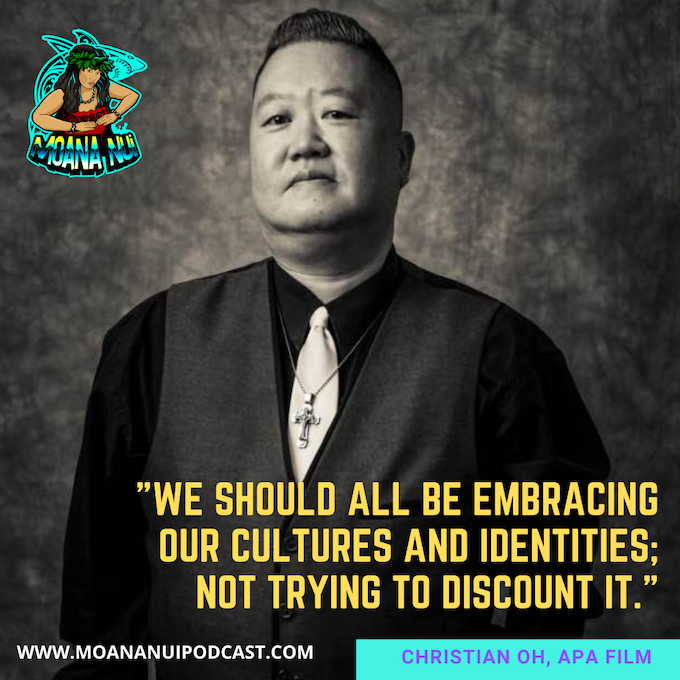 Christian is an academic, social media guru, event producer, filmmaker and talent manager who has been active in the Asian American community across the U.S. for 17 years. He currently chairs the board of the DC Shorts International Film Festival and is President/Executive Director of the DC Asian Pacific Film Festival. He has produced and directed many award-winning shorts, music videos, commercials, and public service announcements. Christian also loves producing events and helped numerous organizations with a variety of events, including the Korean Festival of Maryland from 2016-2019, NC Korean Festival from 2019-2020, KORUS Festival of VA from 2006-2015 and Korean Center, Inc. of San Francisco with their successful 1st Annual Bay Area Chuseok Festival this past October. Christian was an adjunct faculty for the Asian American Studies program at University of Maryland where he taught ethnic studies in film, video and social media. He studied at the George Washington University Documentary Center and interned at film festivals including Cannes and Sundance. Born in Seoul, South Korea and raised in Iowa, Ohio and Virginia, Christian now lives in the DC Metro area.

Episode 22: The Most Enthusiastic Man in Comics with Mike Watson Mike Watson is a comic book artist/creator for Freestyle Komics hailing from Cleveland, OH, as well as the host of Chat and Draw. Holding a bachelor degree in Fine Arts from the Columbus College of Art and Design where he helped to publish CCAD’s first comic. Mike has been working in the comic field since 2005 beginning with his own publishing house Freestyle Komics. He creates the comic series Hotshot (Nominated Best Indie Ongoing Series 2006).

You can find him on all platforms @mostepicart.

Tune in to Chat and Draw on Twitch - http://www.twitch.tv/mostepicart.

His comics shop is at http://www.fsknow.com. 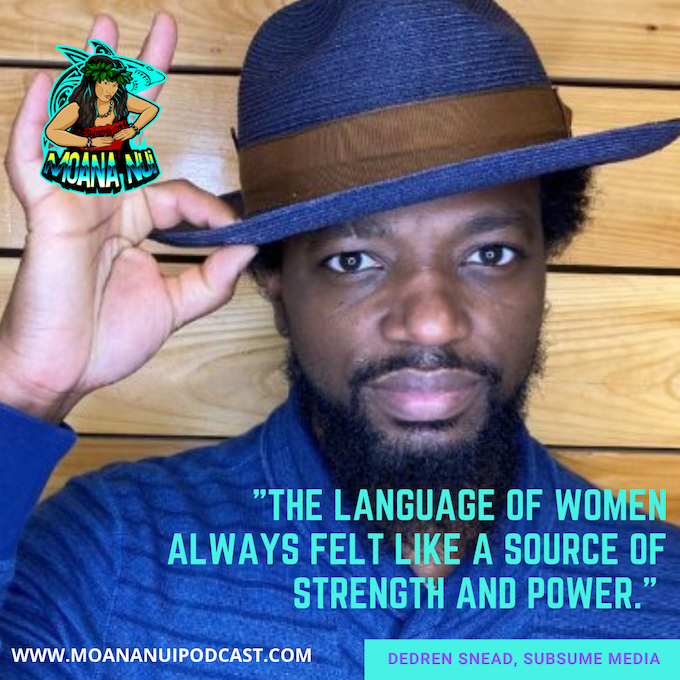 Dedren Snead is the creator/ writer of the Glyph Comics Award-nominated comic book series, Sorghum and Spear, and creator-writer of the upcoming Turnkey comic book series. He is a writer, content creator, and being both a Futurist and Retroist, his mind wanders throughout the space-time continuum, with at 10 year +/- around 1993 as the focal point of his many fandoms. He is the co-host of the New Wakanda podcast and head writer at RAZRWING, Inc. 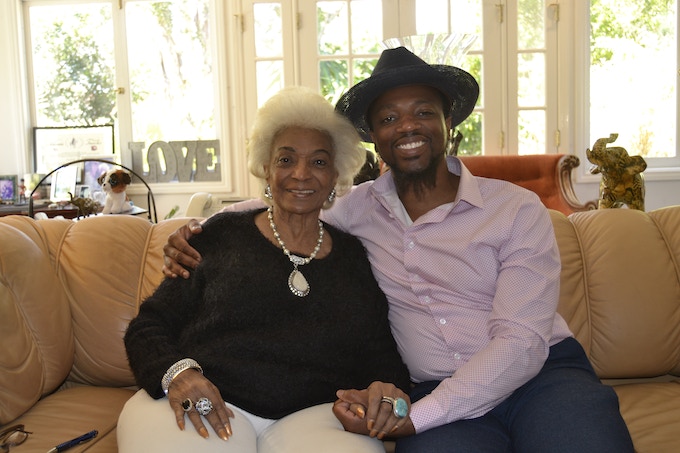 In this episode, Dedren joins us to talk about Sorgum and Spear, a project he created with the great Nichelle Nichols, the actress best known for her role on Star Trek: The Original Series. Within the pages of this fantasy epic, we find an African saga about young girls called to serve their people in a time of war during their ages of innocence. For a young farm girl named NAMAZZI who dreams of escaping the sleepy farm village of her birth, her life would be forever changed the day that monsters came there to find her.

Dedren shares his knowledge of the Dahomey Amazon women of West Africa who influenced  this series and how the women in his own life inspired his storytelling.

You can find more about Dedren at:

Episode 20: Level Up With Glenn Lawrence 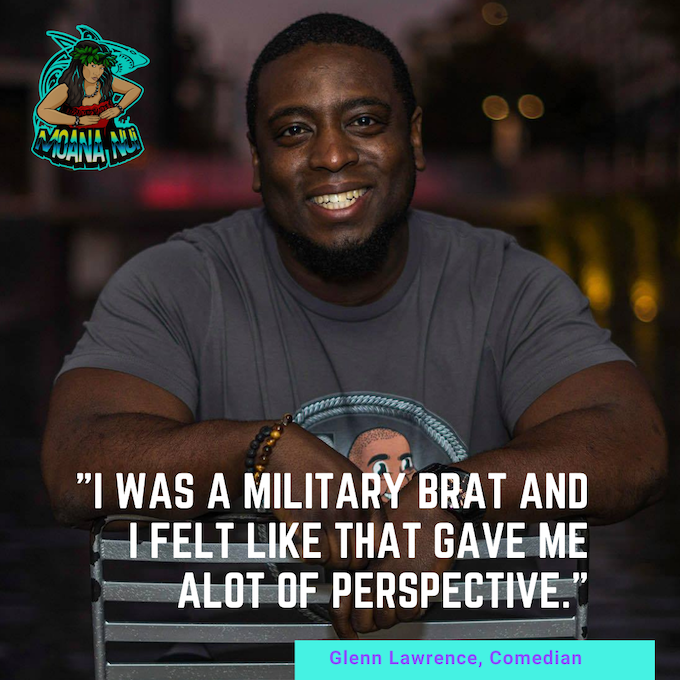 Glenn Lawrence was born in Philadelphia, PA and raised all over the US. He brings a unique perspective to comedy. His quick witted style quirky point of view has allowed to grace stages all over the country from California to D.C. in addition to being a seasoned performer Glenn also produces both content via his LevelUp Comedy YouTube channel and various podcasts in the DC area including My Fantasy Wife with Comedienne Blair Postman. Glenn has performed all over the country including The Sundance Film Festival 2019 and hosted and featured with comedians like Tony Rock, Paris Sashay, Rob Maher, Rahmein Mostafavi and Franqi French.

You can find more about Glenn at:

Get this podcast on your phone!

Play this podcast on Podbean App